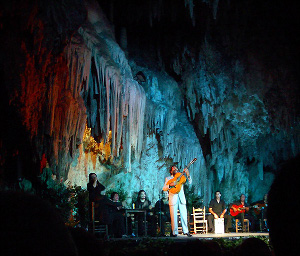 The Nerja Cave natural monument was discovered only a couple of decades ago (in 1959 to be precise), by 5 young boys who were looking for bats at a nearby spot. One of them noticed a breeze blowing and, just like in the best stories, they found a small hole that was blocked by some stalactites. Undeterred, they returned having armed themselves with the equipment to open a way in and were able to walk through the narrow spaces until they arrived at what we now call the "Cueva de Nerja". However, the discoveries didn't end there; they also found a skeleton -a Cro-Magnon-, ceramics and evidence of pre-historical cultures.

After this discovery, researchers and scientists took control of the site, due to its archaeological and geological importance. However, parts of the cave were also opened to the general public because of their incalculable touristic value.

Also called the "natural cathedral of the Costa del Sol" because of its stunning beauty and geographical location, the caverns, passages and chambers that are open to the public comprise 9,371 m2, which is 1/3 of the total surface area of the cave.

As a tourist attraction the complex offers appropriate services and infrastructures such as resting and eating areas, bars, gardens, etc. In fact, everything needed to help you spend a pleasant and enjoyable time.

A Music and Dance Festival is held at the caves every year, and has been celebrated since it was opened to the public in 1960. The festival usually takes place in July and features a variety of artists from the dance and music scene.